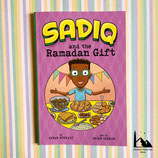 Sadiq and the Ramadan Gift

It's Ramadan In the spirit of the season Sadiq and his friends want to give back to their community. The friends band together to raise money to build a new school for children in Somalia. They decide to put on a community iftar as a fund-raiser but not everyone agrees where their efforts should be spent. Can they find a way to work together? 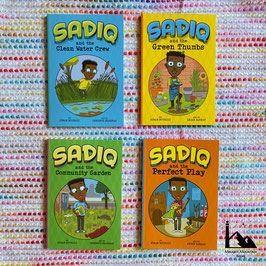 Clean Water - Ms. Battersby's class is heading to the pond for a field trip. They hope to see birds, bugs, fish, and turtles! But one thing Sadiq sees makes him worried--dead fish! What happened to them? This question leads Sadiq on a mission to solve the mystery. When he discovers that the problem is likely polluted water, Sadiq and his friends form the Clean Water Crew! But what can kids do to help clean up bodies of water? Join Sadiq's Clean Water Crew to find out!

Community Garden - On the way to the library, Sadiq and his family pass an empty lot in their neighborhood. It looks like it could use some attention. Sadiq and his brothers and sisters come up with ideas for what the lot could be. A playground? A skatepark? Then a science unit about plants at school gives Sadiq and Hooyo another idea--a community garden! But where to begin? And how to get people involved? It's up to Sadiq and his classmates to "dig in" and make the community garden a success!

Green Thumbs - When a neighbor can't take care of his garden because of an injury, Sadiq's parents volunteer him to help out. Sadiq is frustrated. He'd rather be playing video games or soccer with his friends! To make it more fun, Sadiq gathers together some friends to help. But can they care for their neighbor's garden and have fun at the same time?

Perfect Play - Sadiq's big sister, Aliya, was recently cast in a community theater musical. When Sadiq and his friends hear her practicing, they decide to put on their own play for their friends and family. Sadiq volunteers to be the director, but when he makes decisions without his friends' input, everyone starts to get annoyed. Can they resolve their issues before the big performance?

All packages are shipped within 1-2 business days of the order, unless otherwise specified.

- UK Customers should receive their packages within 7-10 business days from shipping date.

- USA/Canada Customers should receive their packages within 37-41 business days from shipping date.

- International customers should receive their packages within 21-23 business days from the shipping date.